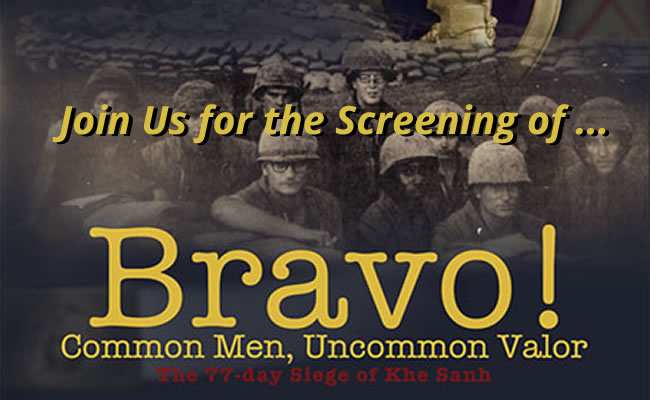 BRAVO! COMMON MEN, UNCOMMON VALOR is a feature documentary produced and directed by Idaho filmmakers Ken and Betty Rodgers. This highly acclaimed film explores the reality of the historic 77-day siege of Khe Sanh, Viet Nam, in the early months of 1968. 14 Marines and a Corpsman, today, recount their personal experience, including returning to their homeland, which did not want to hear their story.

While a stunning history lesson, BRAVO! is also a contemporary story, as a new generation of soldiers comes home from the Mideast. The reality of these stories is as compelling as any fictionalized account of warfare, and offers an urgent message of righting the wrongs of previous responses to the warrior’s return. This is a film for veterans, family members and for human service and medical providers who serve veterans; it is for historians, sociologists, students, and for those who simply want to better understand the human cost of war.

The film was edited by Vietnam veteran John Nutt, a BAFTA award-winning veteran of the film industry. The final remix was done at Skywalker Sound in Marin County.

All proceeds will benefit the Eagle Field of Honor, where 600 American flags are placed annually (prior to Memorial Day), each one honoring a veteran. It’s a spectacular and very moving site.

The theater has limited seating, so purchase your tickets today. Be sure to invite a guest. $10 donation per person. The Field is a 501(c)(3) organization.

What: Screening of Bravo! Common Men, Uncommon Valor. The story of Bravo Company, First Battalion, 26th Marine Regiment during the siege of Khe Sanh during the Vietnam War.

Ticket Cost: $10.00 each and all proceeds go to the Eagle Field of Honor

For more about the Bravo! Project visit:  www.bravotheproject.com

Sponsored by: Lithia Ford of Boise